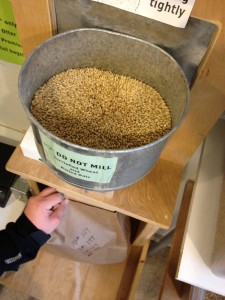 So, I’ve been brewing for over a year and a half now, have over a dozen brews under my belt, and I’m still trying to hone the basic steps of brewing down. Something that I’ve been doing for the last 3 or 4 months is Brewing in a Bag (or “BIAB” as it’s known in the homebrewing realm), which gives me a little more control over how much sugars (and what types) get into my wort (unfermented beer). It’s been pretty sweet and I think I’ll keep it up for the foreseeable future for two reasons: 1) No additional equipment, and 2) Less beer! I never thought this would be a good/better thing, but I have had a hard time both getting rid of 50 bottles of beer as often as I brew, as well as not wanting to experiment with 5 whole gallons. The 2.5 gal BIAB batches lend themselves much more to experimentation, and it’s a lot easier/faster to make 2.5 gallons of beer in your kitchen. Anyway, I love it.

Quick aside: There are two main types of brewing at home: extract brewing and all grain (AG) brewing. Extract brewing just means that you use extract (no, really). This is what ferments (sugars that the yeast turns into alcohol and CO2). AG is simply that as well: no extract, just grains. You steep the grains at different temperatures to get different enzymes (alpha and beta) which cleave starches into sugars (basically, breaks down large sugars into small sugars, so the yeast can successfully ferment them).

So, onto the beer at hand! 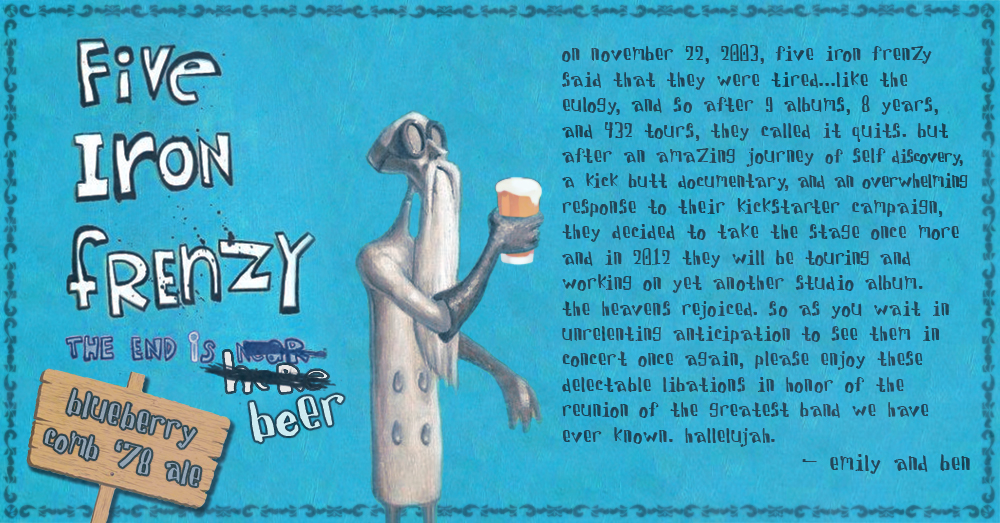 One of my favorite bands of all time is Five Iron Frenzy. If you’re at all familiar with their epicness, then you know they were alive from 1996-2003 and then sadly, decided to go their separate ways. Fortunately (and miraculously), Reese Roper, Jeff the Girl, and the rest of FIF decided to get the gang back together and reunited in the fall of 2011. They’re going on tour all summer 2012, and will be releasing a studio album in the spring of 2013. It’s kind of overwhelming, and as overjoyed as I was, I decided to combine two of my biggest joys in life in order to create: Five Iron Frenzy: The End is Beer – Blueberry Comb ’78 Ale. And while it’s certainly a runner up for one of the longest entitled beers, it’s been been one of the most fun beers I’ve ever brewed.

Basically, it’s a simple American pale ale, with a large amount of blueberries in it. And while a lot of the blueberry juice fermented once I racked on top of it, I’m pretty confident that this dark blue/purple beer will at the very least have a distinct blueberry aroma to it. Fingers crossed.

I’ll put all the brewing details and updates on this page, as well as fermenting, bottling, tasting notes as I go for up to a year or so (until I run out of this stuff), but I’ll also try to post bigger, more momentous occasions regarding the beer as new posts. And as always, I’ll tweet out just about everything I do here. Enjoy! 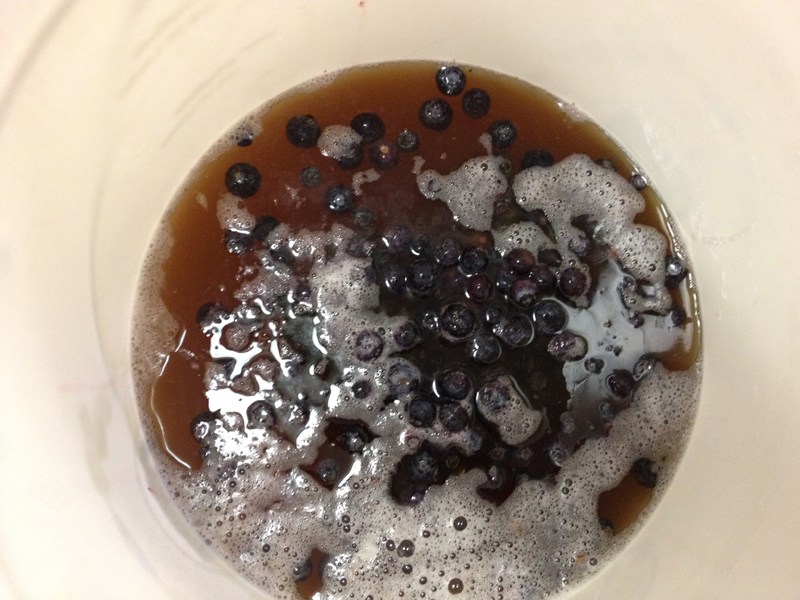 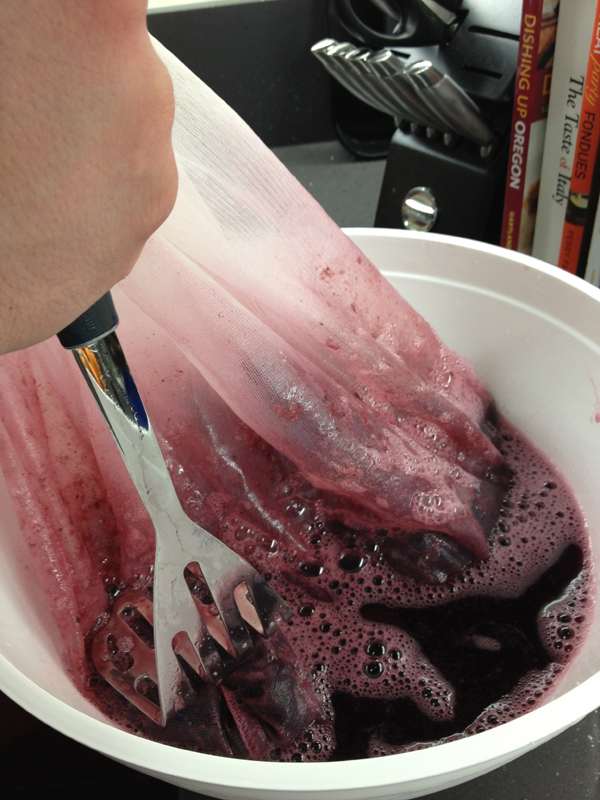 3/30/12 – Brewed it up. Found the recipe here after researching for a few hours. Almost immediately regretted the decision as soon as I bought the grains (of course). Oh well, I’m sure it’ll be fine. RDWHAHB, right? Did BIAB on electric stove in kitchen. Started with just over 4 gallons of water, ended up with about 2.6 gallons. OG = 1.046. Fermented at 68-70°F.

4/6/12 – Finished primary fermentation. Got down to 1.013 gravity reading. Racked the 2.5 gallons of beer onto 4 lbs. of frozen blueberries. More research, and decided to mash up the blueberries–just enough to break up the skin–before placing them in the fermentor.

4/14/12 – Check the gravity and put the hydro sample in the fridge for later. Just like I thought it might, it had continued to ferment (the blueberry juice) and was at 1.010. I’m shook up the blueberry bag a bit and it was bubbling within a few hours; I will definitely be giving this a few more weeks before bottling. Although, Blueberry Beer Bombs like an awesome band name…

4/15/12 – Had a little taste test with the hydro sample (about 4 ounces) with SWMBO. She loved the blueberry smell, while I was a bit dismayed at how watered-down it tasted. While there was definitely a lot of fruit flavor in the aroma, and in the aftertaste, it wasn’t explicitly blueberry. I thought doubling the amount of blueberries in the recipe, combined with squashing them all before putting them into secondary would leave an (almost) overwhelming amount of blueberry aroma/flavor, but if so, it’s definitely not there yet. I’ll check the gravity/taste in two weeks.

4/19/12 – Visible”skin” on top of beer, possible pellicle forming, infected perhaps, collected one bottle, will taste in two weeks. NM. Given up on making this batch a “pale ale”. Something infected it and I’ll just try to infect it MORE with controllable bugs.

4/24/12 – Pitched trub of Cranston’s (lambic) — hoping to resurrect this botched batch with some solid dregs. We shall see.

5/8/12 – Amazing pellicle on top. Smelled almost exactly like a cascade brew. Lots of lactobacillus I’m guessing. Kinda blown away. Filled up a bottle, carbed it. We’ll see in two weeks!

5/24/12 – Because the sample didn’t taste so great (very watery, light), I blended in a gallon of the Orange beer to add some matinees a bit. We’ll see how that turns out.

T: Short, sharp citrus acidity, longer yet subtle blueberry sweetness that sticks around but eventually turns into a strong and lingering sourness that you feel in the back of your mouth for a few minutes after each sip. Very complex layering of flavors from multiple light, sweet fruits to a light tartness in the nose that moves into strong sourness in the end.

M: Carbonation lifts it off the tongue so it finishes quite dry, while only being about 6% ABV. Much more carbonated than it looks, almost champagne-like effervescence.

O: Amazing, amazing beer. Astonished that it was so sour while also maintaining a nice balance of fruity sweetness. Not sure how to fully recreate this guy. Maybe with a 66% blueberry pale ale, 17% orange pale ale, and 17% Belgian strong ale. Overall, best beer I’ve ever made, and a great sour.

11/28/14 – Tasting with Jason & Hannah. This beer gets better and better. Still have 5 bottles left, and I’m planning on tasting one per year. We’ll see how that works out. Net time I’ll take diligent notes and post them.

6 thoughts on “Five Iron Frenzy: The End is Beer”