I’ve done a lotta stuff I’m not very proud of in my life. Getting expelled from school, eating “just one more” chocolate chip cookie (every time), and punching my brother (and throwing sharp/heavy things at him as well…) when we were kids (mostly), are just a few that come to mind. But there are a few things I am pretty darn proud of as well. This website’s probably one of those things. Graduating from college is another one. But one of the biggest took place last November, when I wrote a novel.

It wasn’t an instant classic or the best-written novel, and well…okay fine, I’m quite sure it wasn’t very good at all. But that didn’t matter much, because it was an original creation that I made out of nothing (ex nihilo). And ever since I was a young boy, I wanted to be  a writer. However, being a writer was on a long list of other things I wanted to be as well, but it was definitely high on the list.

Also on that list? Comedian, painter, garbage man, doctor, rock star, graphic designer, music producer, and yes, even the hallowed title of hall director. But when I got halfway through my third year in college, I figured I should probably stick with a major. Then I realized I only had three options if I wanted to graduate on time (which I did): history, philosophy, or English. I knew I wanted to do something creative, and so I chose the most tangibly creative one of the bunch…with a writing emphasis.

So after graduation, I got the question, “So, what’re you gunna do with an English major?” quite often.

My answer? “Well, I love writing, so maybe someday I’ll be a famous one of those…?” It wasn’t my brightest moment, but being successful at being creative is one of my biggest (and most frustrating) dreams.

I’ve always been fascinated by the idea of creativity. It’s so unique and personal. It’s something that everyone does all the time, but where does it come from? The idea of creating something completely original is something that I struggle and wrestle with every single day of my life. How does one know if their creation is original, or simply a combination of experiences and influences from other pieces of art and creations throughout one’s life? And at the same time, is it even possible to have an original idea, creation or action? 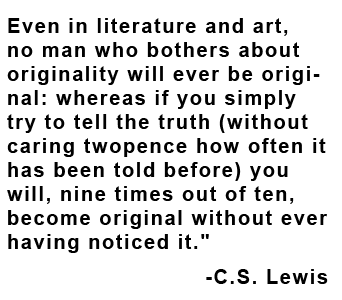 C.S. Lewis says it better than I ever could, with a bit of a kick to the shin (on the left).

I love this quote for two reasons: 1) Because he uses parenthesis–I love parenthesis (and so should you [and you should probably use them more {like an over-complicated literary algebra equation}]), and 2) Because he’s completely right. It’s the truth of a story that speaks to the heart of those who encounter it.

Think of your favorite movie. That movie that speaks to you and can bring you to laughter and tears and pensive realizations. It has little to do with the fact that the movie is being “original” or not, and completely to do with the fact that it is conveying a powerful truth to you. It may be doing it in a unique and new way, and it may be a very personal truth, but it most likely is something that many people can relate to at the same time.

One of my favorite movies is Good Will Hunting. Love it. Matt Damon, Robin Williams, Minnie Driver all doing their thing in Boston. C’mon. Doesn’t get better than that. It won the Oscar for Best Original Screenplay in 1997–and despite whatever Hollywood rumors (truths) you’ve heard as to who it was actually written by, it was still an “original script” at some point.

But even though the characters, situations and overall story archs were all very unique and new, there really wasn’t much “original” about the movie. At least, nothing worth setting it apart from other films. The strengths had little to do with all of those normal, cliche cinematic aspects.

It’s my favorite movie for three reasons: 1) his relationship with his mentor, 2) the fight scene, and 3) his future.

(I promise to make this quick…)

1) Matt Damon’s character’s relationship with Robin Williams’ character is something everyone can relate to. A mentor–mentee relationship is a powerful thing, and very impacting on a young man’s life. Throughout the film, he gets to know him, looks up to him, and ends up emulating him in the end. (Watch this amazing scene for the skinny on this part…)

2) The fight scene between Damon and Driver (in which she confronts him about him withholding embarrassing truths about himself from her) is a huge scene in the movie because it ends with him saying softly, “I don’t love you,” and walking out–leaving Driver’s character crying and alone (I know, I know. A bit melodramatic). It’s an intense scene, but it’s moving because it shows a common and deep motif in many relationships. (Here it is…if you dare.)

3) However, the most impacting scene to me was the one that begins with Robin Williams asking Matt Damon’s character, “What do you really want to do?” (with his life). He neglects to answer the questions honestly, but by the credits he ends up following the love of his life across the country and then (presumably) doing something he loves with the gifts he has. (Watch it right here.) (And the ending scene here…)

Why do I care about this? Because I too don’t really know what I want to be when I grow up. And more and more people my age (this generation) have the same issue. They graduate from high school and/or college with a few interests and soon realize that these interests and skills can’t really be tangibly executed through one vocation. So they end up with 9+ careers in their lifetimes and live fruitful, successful and rewarding lives full of much joy, loving families, warm fireplaces, great friends and a few little children running around the house (hopefully…that’s the plan at least).

What am I talking about right now? Well, if you’re gotten this far through this rant, I’m hoping you are at least connecting with 5% or more of what I’m writing about. Basically, (I think) my point is that we can’t be all that original with our creations. Like movies, books and any other type of artistic expression, we can emulate and mask truths in new ways with our art; truths we have seen/heard before and digested throughout our lives. And it is when we think we have truly created something original, that it is most likely an even older truth that has been so innately bred into our lives that we didn’t even notice it.

So last November, when I took part in NaNoWriMo, I was genuinely excited about this epicly long tale of this quiet-man-meets-extroverted-girl type story that I was writing. It wasn’t the most original story ever, but at the same time I still think the methods I used to convey the story, as well as the characters and scenes were very original and even (at times) a bit creative.

But what’s the best part? Definitely none of the original characters, scenes, locations, speeches, interactions, story archs, etc. The real meat of the book, is simply conveying the idea that no two people have the same path to tread on their search for truth. It’s not a new idea, or even the noblest of concepts, but it’s one that I certainly enjoy and stand behind fully.