[This post is brought to you by the generous and consistent insight of the Mad Fermentationist, Mike Tonsmeire]

Of course it is. And while always maybe be going a bit too far, I’m still going to stick with at least: “New is OFTEN better.”

What I mean to say is, there’s a lot of new thing coming up in my life: new job prospects, new locations, new degree (for mi esposa), new hobbies, new beers recipes (whaaattt??? I know!!!). 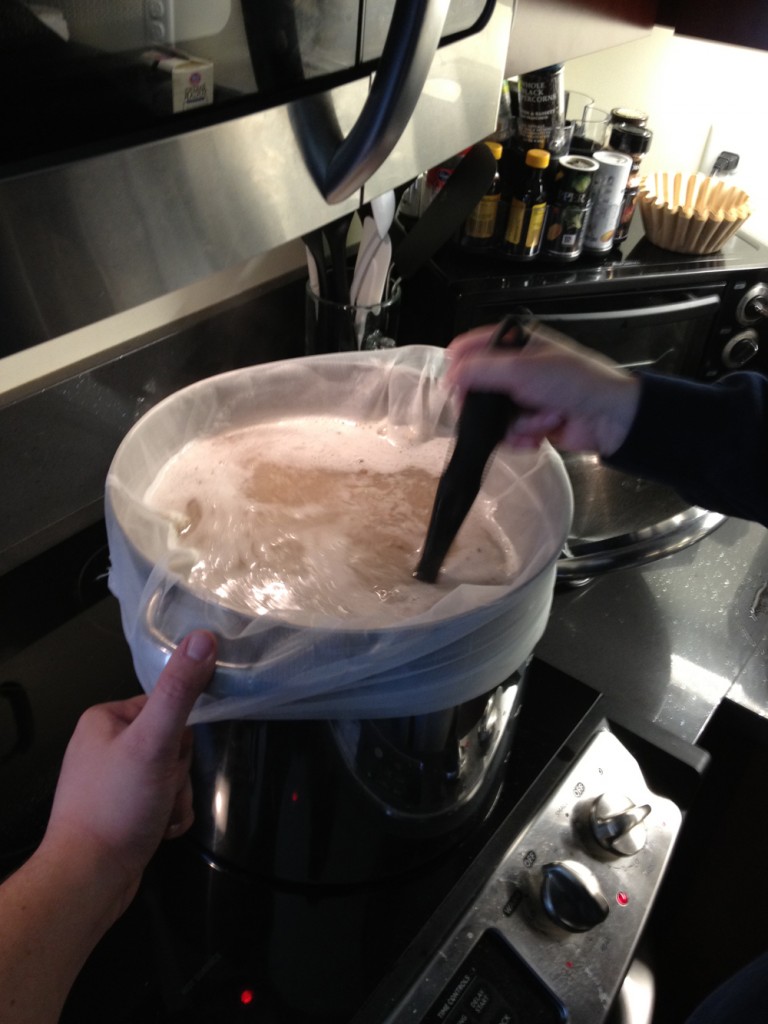 The new obsession for the local Portland Helms family is Brewing in a Bag. It’s amazing. If you’ve been homebrewing for a year or so (like us) and have maybe dabbled in all-grain with a few friends, or just watched hundreds of YouTube videos (like us), but you’re still too afraid, confused, or too poor (like us) to get into it, then have we got the answer for you!!!!¹

The link above summarizes it wonderfully: In layman’s terms, BIAB can be summarized as follows: You put a nylon bag in a big pot of water, pour in some grain, heat it to a specific temperature and hold it at that temperature for 90 minutes. At the end of the 90 minutes, the bag holding the grain is removed and then the remaining liquid (hot liquor) is boiled for 90 minutes with hops being added at several stages during the boil. After the boil, the resulting wort is cooled rapidly and the yeast pitched. All other stages of the brewing process should be familiar to those who have done some kit brews.

[There’s also a great Brewing TV episode that breaks it down in a nerdily awkward 25 minutes.]²

So this is how we brew now. Plus, instead of ending up with 5 gallons of beer (50 bottles), we’ll end up with just under 3 gallons (30 bottles). This is amazing. This also means that we’ll brew more often, and will be much more willing to experiment with our beer, which for me is one of the main attractions to homebrewing in general. If I could buy everything I brew at a bottle shop, then I wouldn’t brew.

All of this excitement around a whole new brewing process (no more extract!!!) got Hannah and I excited about brewing all over again and during our 12 hours in our car this past weekend, we thought of plenty of new recipe ideas. Our next beer will be Clever Girl, a Jurassic Park-inspired bourbon barrel stout–we’ve been planning this one for over a year now.

But our NEXT one (after that…) will be a Hendrick’s gin-inspired beer. Last spring we discovered the greatness of Hendrick’s gin. While gin gets a pretty bag rap with our generation, we’ve loved it from the start (…of last year). We tried Seagrams, Tanqueray, and a bunch of different type’s of gin, but when we had Hendrick’s while we were in Charleston, South Carolina for my brother’s wedding last summer, we fell in love. Last week for Portland’s Zwicklemania, Breakside Brewery debuted their dry-hopped gin barrel-aged IPA, and as soon as we heard about it, we knew we wanted to rip their idea off…I mean, pay homage to them. 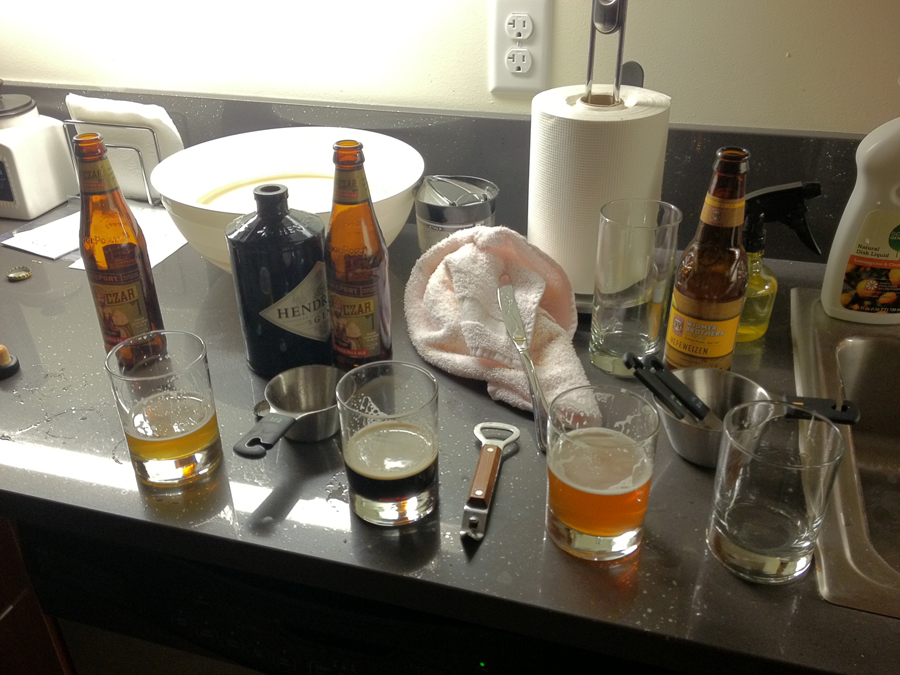 We’ve started doing a little R&D by mixing different types of beer (IPA, hefeweizen, stout, pale ale, et al) with Hendrick’s and we’re thinking PA is probably our best bet. It’s mild enough that the hops won’t be competing with the juniper, but it’s malty enough to not get run off the road by the gin-iness of Hendrick’s. We’re excited. We are (Hannah is) also trying to figure out ways to infuse the juniper into the boil, as well as the rose petals and cucumber (that Hendrick’s is famous for) into the secondary most likely. It’s going to be an adventure over the next few months filled will trial and error most definitely, but it’ll be exciting.

After that, Hannah has a Basil-infused sour in her mindworks…we’ll see if that one actually comes to fruition or not, but either way, another sour will be on the way soon.

We brewed a rather simple pale ale last week (60/40 pilsen/wheat) and threw White Labs’ Belgian Sour Mix 1 yeast (WLP655) on it which has some good ol’ Brettanomyces and Saccharomyces strains of yeast as well as bacterial strains Lactobacillus and Pediococcus. All of those crazy “bugs and critters” (as homebrewers affectionately refer to them) should give our poor, little, helpless PA a lovely acidic, sour taste.

Eventually we’ll start solera-ing³ the hell out of our little 5 gallon carboy full of sour beer (and possibly even move it up to a 10 or 20 gallon barrel someday). With each gallon or so we take off, we’ll start throwing cherries, cranberries, currants, wine, and even strawberries, blueberries and blackberries into them. The future is looking bright for [insert brewery name here]!!!

Oh yeah, and my brother and I are thinking about starting up a brewing website…still trying to figure out the exact niche and point of it all, but we’re falling more and more in love with homebrewing, and we’d like to spread the love, or at least organize resources for the love of homebrewing…more on that soon…hopefully.

¹ Not that brew in a bag is a halfway step to all-grain. Many say that it is in fact just as good and has as many or more positives compared with traditional all-grain brewing. (See: James Spencer’s Basic Brewing podcast from April 2, 2009 with Australian homebrewers Dan Walker and Geoff Hammond.

³ For more on the solera method, check this out: la metodo solera