TV is a virus. 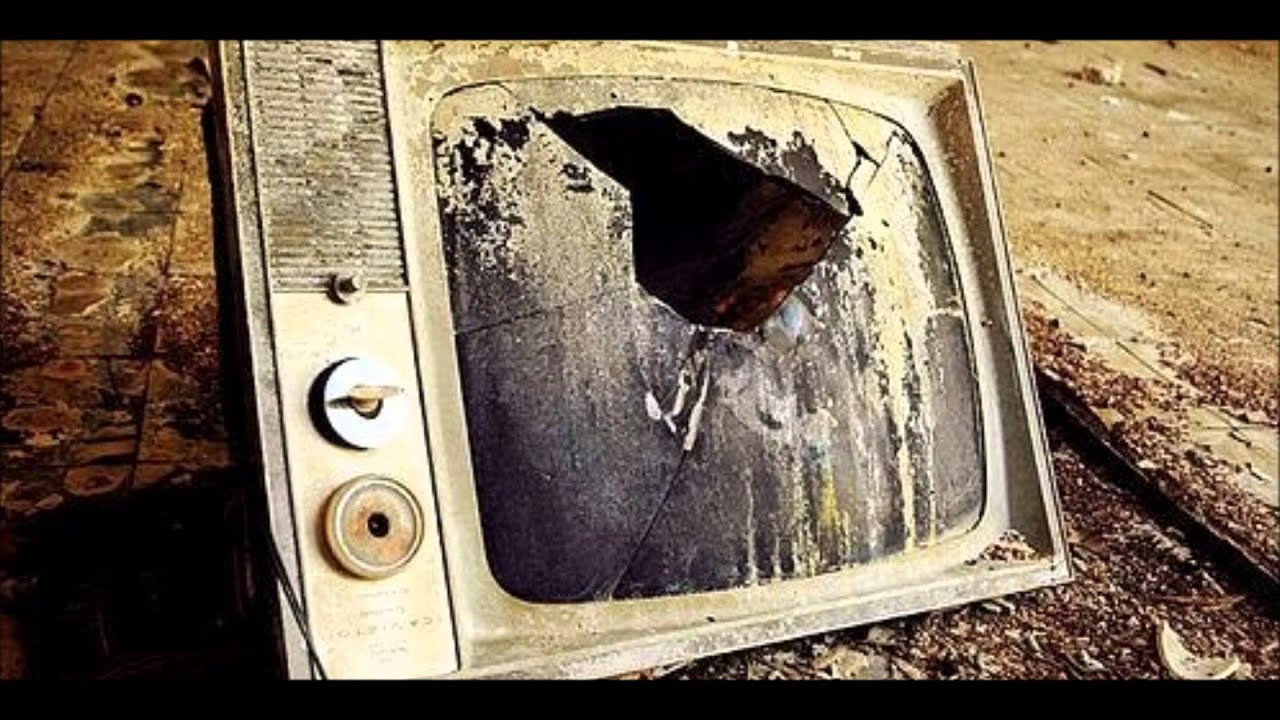 And just like a virus, it has spread throughout my life, slowly taking over minute by minute until it finally erupted into an overwhelming cesspool of destruction, this past weekend.

Let me back things up a bit…

But really, when I was a kid, I loved TV. I would watch all types of shows. Rugrats, Doug, G.I. Joe, All That, Captain Planet. You know, the usual late 80s–early 90s kid shows. And when I was old enough, I moved on to more mature-themed programming such as The Simpsons, Clarissa Explains it all, Are You Afraid of the Dark, Malcolm in the Middle, etc. Whether it was before the carpool mom got to our house in the morning, or after school (after all our homework was done, of course), my brother and I were watching TV. The whole time, I would watch wide-eyed, loving every second of the little green, red and blue dots dancing around making characters sparkle and shine as if I was just a sheet of glass away from another dimension. A dimension in which magic was real, beautiful people were smart and everything I said was hilarious. A place not too different from Novato, California but different enough I thought I needed to escape there almost every day.

But then in high school, things took a sharp turn. Television shrank in my life. In fact, I just took a few minutes to think of any shows I watched routinely throughout my high school career and I couldn’t think of any. At all. Wow. Go figure.

Then I realized why this was. I had a flippin’ life in high school! I know. Weird realization. And while that life may have circulated around girls, sports, church, friends, youth group, and family, it was still a life. And that life was a lot more real than Friends or Seinfeld. At least, most of it was.

And that’s not to say that having a life needs to be completely without television. On the contrary. Many of my fondest memories of friends and family were had sitting around watching Bond or Eastwood marathons on TBS/TNT, and watching The Adventures of Pete & Pete with my girlfriend, and having Office parties with friends at APU throughout my college career. And my brother and I still bond over talking theories and theatrics of TV shows to this day. TV can play a big part…but…well, just hold on a second.

So then I went off to college and didn’t have cable for five years. FIVE YEARS! WITH NO CABLE? Just think about it. To some (and to me, at times) this idea is enough to just stop reading right here on account of the writer being insane. My bad. Moving on…

Throughout college, and similar to high school, I had a life. I had friends and roommates who I would spend the majority of my time with, talking about daily activities, sharing stories and life lessons with one another. I even had a few girlfriends who I was lucky enough to be able to spend time with. And not only that, I played intramural sports, I took more than 40 classes, I lived in Boston, led summer camps, worked a few jobs and somehow managed to graduate in four years. God bless ’em. The entire time, no TV. Okay, a little TV. But I never once skipped any program, date, gala, event, etc. to watch any show on TV.

After I graduated, friends moved away, girlfriends left, classes diminished, and grad school sucked away whatever free time I used to have. Or so I thought.

In between papers and hanging out with roommates, I re-discovered television. Did you know that there are dozens, or even hundreds of TV shows that produce brand new episodes each and every week on television? Did you also know that each of these episodes is available online at no cost at all?! Did you also know that every single episode of just about any television show that has ever aired in the U.S. is available online for free?!?! If that’s not a recipe for disaster, I mean, addiction, I don’t know what is.

So, in past posts (even very recent ones), I have raved about certain TV shows. Shows like Lost, Breaking Bad and Lie To Me that I honestly think are great television series on TV right now, and some might even stand the test of time and be known as some of the best writing/acting/etc. in TV history. For this seeming contradiction, I apologize. Let me explain. 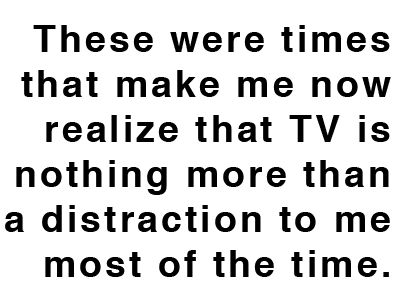 Like many post-graduates, this has been a very lonely time for me. It’s trite, but it’s real. Some of my friends turned to drugs, others to women, others to travel, some invested themselves 100% into their jobs or hobbies. So, I turned to television. (Not as flashy as girls or as exciting as travel, but it fit my budget.) It’s easy, it’s there, it’s reliable and it’s entertaining. All attributes of a decent friend I guess. Although not a suitable replacement (I say with fully hindsight clarity).

And with great, entertaining shows like Family Guy, 3o Rock, The Office, Frisky Dingo, etc, it’s easy to get caught up into watching these shows each week. And for the past two years, I have been. In fact, I’ve watched far too much TV to the point where I’m embarrassed to admit how many episodes I just calculated that I’ve watched that last 20 months. Embarrassing and depressing at times.

But even though that part of my life, that grad school part of my life is still rather fresh, I already know that I want my life to be different. For starters, I was to have a life.

I’ve realized that the times I’m happiest in my life, the times when I’ve felt God’s love and been genuinely joyful and knowledgeable of the blessings I’m constantly surrounded with, I don’t even think about TV. Times like my high school days when I played sports after school almost year-round, then went back to my girlfriend’s house and did absolutely nothing and loved it, or times when Tyler, Sean, Brent and I would swim in the west campus fountain in speedos at 1am, or times when Chile, Dan, Rice and I would sneak into the Citrus College pool or do the naked mile at 3am only to be chased away by campus safety officers. These were times that spoke to me as a person and made me feel alive and loved. These were times that make me now realize that TV is nothing more than a distraction to me most of the time.

In these joyous times, I realize the times when I “had a life” are times that I spent with people I cherished doing things I loved, and focused all of my attention on things that mattered.

The past two years have been a drought as far as real meaning in my life goes. And well, while this is a lot more than just about TV, a lot of my lack of life has been due to these entertaining, life-sucking dramas that unfold slowly over years at a time.

Life’s kinda like that sometimes. A kick in the nuts to wake you up. And this week’s kick in the pants was the show Lost. The acclaimed ABC television series that is renowned for its mysteries and confusing plots has had an amazing week as it ended its six-year run on air. After the two-hour pre-show special, the two and a half hour Lost finale and the hour long Jimmy Kimmel Live Aloha-to-Lost special, the show had an amazing goodbye. That said, I’ve realized TV’s grasp on not only my life, but also…well…okay, my life.

Again, this is a process, and something that I don’t expect any readers to fully understand as it is my process, and something that even a month from now I may look back on and not recognize. Hopefully this will serve as a warning to others though, if nothing else, to every once in awhile take a break from that show you’re addicted to. Take a reality check and realize that there are so many better things to spend your time on. Cliched things like working at a soup kitchen, hiking up a mountain, hanging out with loved ones or reading a book can all be inserted here, but for me it’s much more about living up to my commitments. Whether these commitments are ideas of grandeur or just small hopes and dreams I have for my life, none of them revolve around the last episode of my favorite show. And none of them can be accomplished by being constantly sidelined or pushed away by such a menial distraction as television.

In the end, TV isn’t evil. It’s not something that I’ve now banned from my life. In fact, I guarantee I’ll watch far too much of the World Cup this June on ESPN and way too much of the San Francisco Giants this Summer on Comcast Sports Net.

However, TV for me, is a measuring stick of telling just how much I’m living my life to the fullest. The larger role TV plays in my life, the more I know the goals and plans I have for my life are on the back burner.

So my dream, I guess, is that one day the amount of TV I watch will barely hold a candle to the amount of time I spend living the magnificent life I know I should be living…someday.

5 thoughts on “Kill Your Television (Part 2)”