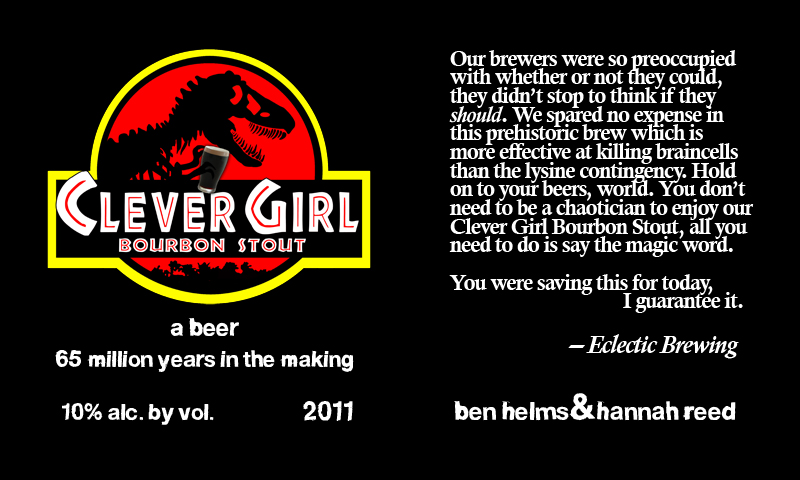 This is one of the first beers I ever thought of after I started homebrewing. I remember texting with Hannah during the first few months we were dating, regarding many different beer ideas and the Jurassic Park concept was one that consistently came up again and again. We eventually came up with the label, and it took over a year to actually get the right recipe together.

My brother made a delicious Founders KBS clone (from Zymurgy via Homebrewtalk) a few months ago, so I decided to take that recipe, and adjust it a bit in hopes of making it a true bourbon barrel stout. Unfortunately, the only barrel I own is a whiskey barrel (small, 5 gallon), so the “bourbon barrel” is actually two parts: 1) I will be putting bourbon-soaked oak chips into the beer late in secondary, and 2) I’m aging it in a (whiskey) barrel. So even though it’s not a bourbon barrel, it’s still all the elements of a bourbon barrel stout, just in an unconventional fashion.

One of the big concerns with the BIAB technique I’ve been using is that you can only use so much grain, because you’re mashing/boiling all in the same container–plus, you need to lift all of the grains out of the kettle at the same time. While seemingly labor-intensive, it actually wasn’t so bad. Admittingly, I’m only making a 3 gallon batch, so the 10 lbs of grain wasn’t so bad to lift, even when soaked with steaming hot water. However, because I’m using a 5 gallon pot, there wasn’t much room for the grain and 4.25 gallons of strike water.

I also had a few issues (detailed below) with fermentation. My thought it that I may have taken it off the primary yeast cake a bit too early, which stalled around 1.030 for a at least a week. Fortunately, once I re-pitched US-05 (Safale’s dry American ale yeast), it continued to ferment for almost another week. I did a lot of research (“What to do with a stuck fermentation?” and the like…), and went with Mike Tonsmeire’s suggestions of just pitching US-05, which is a very forgiving, clean, hard-working strain. Looks like that was the way to go. I’ll update (below, in the notes section) just how far the gravity got and where it was when I decided to bottle. 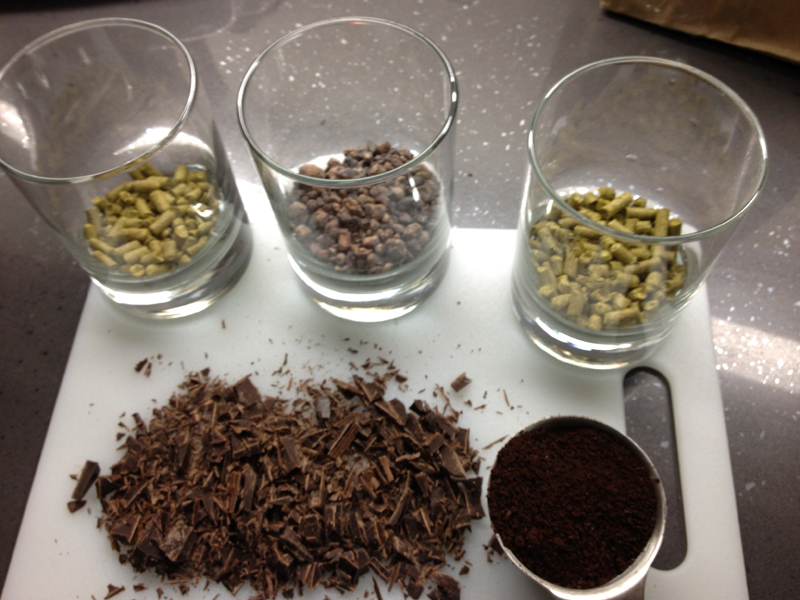 What I think happened (which could be completely wrong) was that I pitched two yeasts, and they either got confused/tired, or (what I’ve heard happens) one of them dominated the other, and then just stopped because of lack I under pitched. I kind of doubt this, seeing as I pitched two bottles for only 3 gallons of beer, but I supposed anything is possible, especially with such a big, complex beer. The more I research yeasts, the more I realize that they’re more than just another ingredient and just how finicky a living organism can be–occasionally yeasts just peter out. And while both yeasts are Saccharomyces cerevisiae strains, and are probably virtually (if not completely) identical, but for some reason they decided to stop fermenting. While they did get pretty far (from 1.092-1.030), they were supposed to get to significantly lower (1.022).

My wife and I are excited for this beer, not only because of the excessive nerd factor (JP!), but because my brother’s version tasted so amazingly good. I figure his version, plus a few months aging in a whiskey barrel couldn’t be too bad. 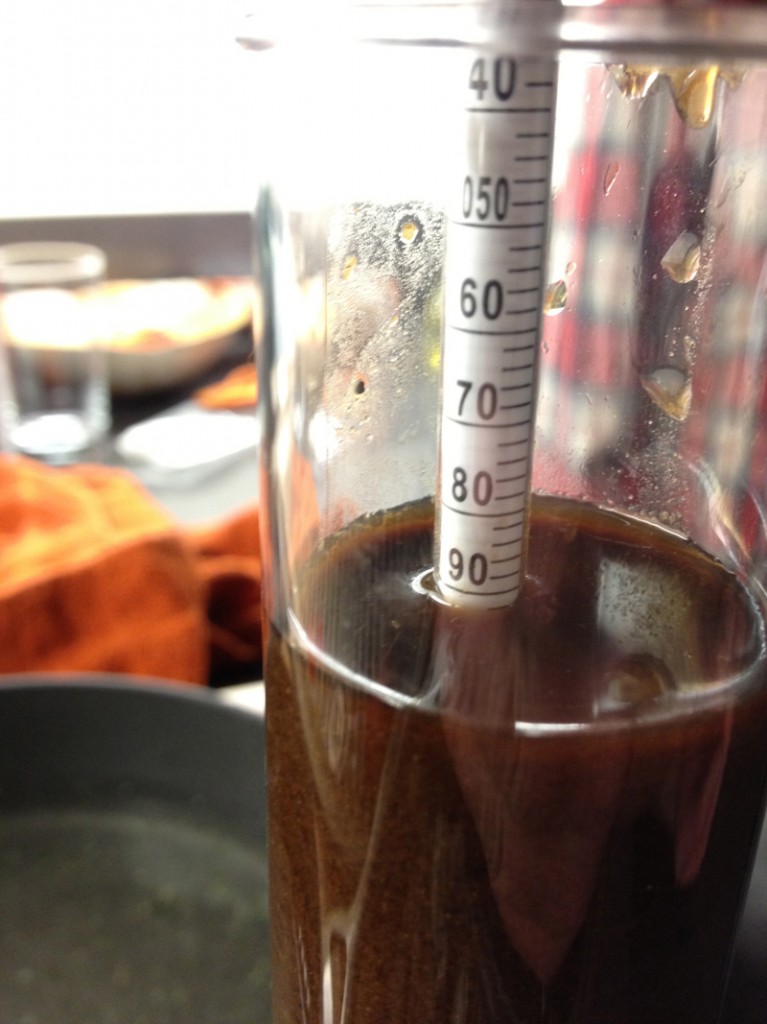 2/25/12 – Brew day! Found the recipe here after my brother told me his version of their recipe turned out quite well (he was right). Did the classic BIAB method on our electric stove. Started with 4.25 gallons of water, ended up with almost exactly 3 gallons.  Added the hops, chocolate, and Sumatran coffee as specified above. OG = 1.092. Fermented at 68-70°F.

4/9/12 – Pitched US-05. Was refermenting within hours. Will re-check gravity in a week or so–I want this baby to age in the barrel for a few weeks to months (depending on oaky flavor).

4/14/12 – After almost a week of bubbling, I decided to take a hydro sample (and a little taster–see below). The beautifully talented US-05 got this sucker down to 1.022 in just 5 days. And a few days later, it was bubbling again!

4/15/12 – I let the hydro sample chill in the fridge for a night, letting all the yeastie bits (and chocolate, nibs, coffee, etc…man, this is a complex beer!) settle out. This was one of the best non-carbed beers I’ve ever had. It was a sweet stout, with a lovely bitter coffee aroma and taste to it. Man, I’m excited to get this thing going. Luckily, it hasn’t gotten very oaky yet. I think I’ll just try to keep my hydrometer out of the cookie jar and maybe take samples every two weeks (or more) from here on out. As soon as the oak flavor is where I want it, I’ll bottle this bad boy up!