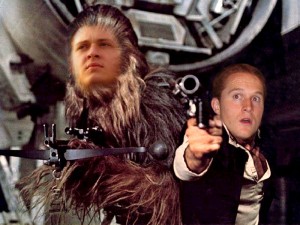 If you’ve ever heard the words, “Aw, but I was going to the Toshi Station to pick up some power converters!” and felt nostalgic, if you know which detention block Princess Leia Organa was imprisoned (AA-23), or if you know the designation code for the clone stormtrooper who was not as his post (TK421), you may be a redne…I mean, you may be a nerd. A big one.

And you know what? That’s okay. Not in the cool, chic version of “nerd” that has become popular that last few years, but in the tan-deprived, acne-ridden, computer game obsessed N-E-R-D sense. If you have a hunch that this might just be you, don’t run from it. Embrace it. (I’m going to try to avoid quoting the trilogy as much as possible in this post, but c’mon…this one’s just too easy.) It’s your destiny.

It’s not that all stereotypes of nerds are true, or good, or deserving, it’s just that it’s an entire culture worldwide that has more or less been driven underground the last few years because of people like this. Nothing against Ralph and his wonderful company, but c’mon man, you’re not helping out those of us who don’t have 32 hours a day to work on our abs…

Moving on, nerds run the world. Think about it. Bill Gates. Steve Jobs. Peter Jackson. Albert Einstein. MySpace Tom. Tina Fey. Leonardo DaVinci. Jerry Lewis. Rivers Cuomo. Rick Moranis…okay, besides that last one, all of these people were leaders of their industry, and uber-nerds at the same time. Maybe DaVinci wouldn’t have used the word, but c’mon, the man worked on his hobbies more than hung out with his friends, he was an admitted “mathematician” and “botanist”, and he’s widely known as LeNerdio DaVirgin (at least according to his Wikipedia page).

Also, for better or for worse, nerds know everything. The only fault here is…they know it. Get in an argument with a nerd, I dare you. You can’t win, even if you think you win. It’s like fighting with your girlfriend (and for you ladies, it’s like fighting with your mom). They know everything, and if they give you credit for knowing a little bit, that means they have you right where they want you. But, you have to give them a little credit. I mean, nerds spend a lot more time than the average person studying, Googling, and writing…well…blogs. They do their research and enjoy learning stuff. That said, the average American does not enjoy learning anything, unless it gives them money, food, or sex. Nerds, on the other hand, have all sorts of forms of currencies that the average person lacks. Items such as trading cards, mint condition action figures, experience in computer technology can all be used as legal tender in exchange for goods in Nerdville. (Btw, if Nerdville was an actual city or township, and you and I were both citizens of said Nerdville, please tell me you’d vote this guy for mayor. Although, the competition would be stiff, verses this guy.)

Another thing you may not know about nerds: they’re all around you. Most people are nerds; it’s just our society that has designated certain industries as nerd-related. Think about it. Fashion design =  not nerdy. Computer design =  nerdy. Sailing on a cruise = not nerdy. Sailing through space =  nerdy. Surfing at the beach = not nerdy. Surfing the web = nerdy. I could go on (I made a list…). The point is, the difference between “cool” and “nerdy” is subjective & arbitrary. Nerds can’t help it if they’ve chosen computer technologies as a major or hobby if they just happen to be gifted in that area. Just because you may have chosen business administration as a path for your life, does not mean you’re not as…okay, so it means you’re cooler, but good luck dealing with the blue screen of death next time it comes a callin!

Okay…try not to take what I’m saying too literally. For the most part they are a kind people. I know I may have shed a poor, mean, aggressive light on them, but they really are benevolent community of intelligent, logical people, who want nothing more than to love and be loved by others. They’re really no different than you or I. They mean you no harm, and besides, if they did, you wouldn’t stand a chance.

Point being: Nerds are everywhere, and they’re powerful, but also kind. I know that not all of them have incredible social skills (as I write this at 8pm on a Friday night…in my living room…alone), but for the most part, they’ve integrated into the American culture rather seamlessly. So the next time you see a nerd, instead of kicking him or her in the buttocks or pulling their underwear up over their head, give them a nice handshake and a pat on the back for being leaders of industry, smart enough to fix our computers, single-handedly carry the economy of downtown San Diego every July, inventing the iPod, and writing/directing/creating, yup, Star Wars.