Q: Saw your tweet (after Game 4 of the NLCS) that San Francisco is “totally underrated as a baseball city” and “you can’t have a better playoff atmosphere than that.” I am a Dodgers fan who HATES THE GIANTS. You didn’t really describe Silicon Valley techie dorks and fair-weather hipster grad students who miss the first two innings because their ultimate Frisbee game ran late as “underrated” baseball fans, right? They couldn’t even sell out Game 3!
— Robert, Pasadena, Calif.

SG: Hey, I expect playoff baseball crowds to generate noise for nine innings, stand every time their pitchers get two strikes, cheer like lunatics any time something good happens, and avoid going into a terrified shell like the guy at the end of “Blair Witch Project” any time something bad happens. That’s the job of everyone in the building. I thought the Giants fans did their jobs. That’s why I tweeted about it. But three other dynamics pushed the atmosphere to another level. 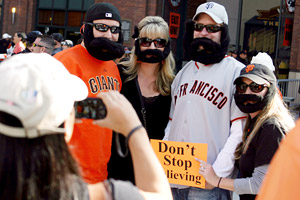 1. For a big playoff game, I want a ballpark that gives me chills in person and looks just as spectacular on television (especially in the HD Era). If I’m not there, I want to be able to feel the tension, feel the history, feel the angst of the fans, feel the excitement, feel everything. I want to see wide blimp shots of the stadium and think, “What an amazing ballpark, I wish I had gone to that game.” I want to feel like something substantial is happening.

Only three ballparks make me feel that way: Fenway, Wrigley and AT&T Park (formerly Pac Bell Park). Fenway has the Green Monster and seats hugging the field; Wrigley has ivy-covered fences and apartment buildings surrounding the park; and AT&T has San Francisco Bay. That’s why they have the collective hammer over everyone else. Old Yankee Stadium got there because of its history and its staggeringly high upper decks, and Dodger Stadium (which always makes me feel like I’m in a “Mad Men” episode) gets 90 percent there during a night game if the sun is setting the right way. But that’s it. I like the new wave of impeccably done ballparks (Philly, Texas, Cleveland, etc.), but they lack that extra kicker that makes you think, “Wow, I can’t believe I’m here.” Sorry, Philly. You’re not topping McCovey Cove. And you know it.

2. The Giants won in 1954 in New York, moved to California a few years later and haven’t won since. They lost the ’62 World Series in the most brutal way possible (McCovey’s line drive that got snared). They watched in horror as the underdog Dodgers won in 1988; one year later, when the Giants finally made it back, a devastating earthquake happened right before their first World Series home game in 27 years and took precedence over everything that happened on the field. Thirteen years later, they choked away a five-run lead in Game 6 of the 2002 World Series, gave away the title to Anaheim, then their best player became the most loathed athlete of his generation. Look, I can’t watch a Giants playoff home game and NOT think of that stuff. Fifty-plus years of pain. It hangs over everything. That’s not atmosphere? You didn’t feel it last night in the third inning when their defense fell apart and the fans went into “oh, no, please, no …” mode?

3. Here’s how I know the Giants crowd had it going these past few days: Joe Buck actually sounded excited to be there. Now that’s saying something. By the way, if the pre-2004 Red Sox blew a World Series trip in Game 5 — playing at home, with our best pitcher on the mound — and now had to fly cross-country to clinch on the road, I’d spend the entire weekend in the fetal position. I’m not sure the Giants can bounce back from that. Tortured teams can’t blow chances in ways that remind their fans, “Oh, that’s right, God hates us.” It never ends well. Hope I’m wrong.

Additional words from an anonymous friend of mine: “Best thing I’ve ever heard. So good to see someone shut up an annoying freaking Dodgers fan. And since when do giants fans miss the first two innings.!? Who the f— is this “Robert in Pasadena”!? I want to kick his a– and tell him what baseball is about. It’s not about loud obnoxious fans that throw food in a s—ty ballpark and boo their own players. That’s for damn sure.”