It took me a long time to realize just how much I valued creativity. I don’t remember when it started exactly, but the passion and ideal of being creative has been growing within me my entire life.

The first thing I ever remember loving was drawing. Holy crap, I loved it. I’d draw all the time; in church, at school, at home. Whenever I had a writing utensil and some paper (or a wall…), I’d be drawing.  It’s something that consumed me. I was the kid in the restaurant that would be drawing on the paper kid’s menu using every single color, staying inside the lines, and making sure to make the drawing as representative of the real world as possible–there were no purple elephants or green monkeys on my menus, that’s for sure.

When I was in the 4th grade, my mom got me a book called “Draw the Marvel Heroes“–just finding the link now and seeing the cover brought back a flood of nostalgia. It was a book that had a bunch of drawings of Marvel characters (Spider-Man, Iron Man, Wolverine, etc.), but in front of every page there was piece of tracing paper bound to the book as well, so you could carefully and meticulously spend hours and hours (and hours) tracing every single line, every single line of shading, and every single ink spot onto that tracing paper. I don’t know how long it took me to finish that book, but I know it didn’t take long. I spent every free moment buried in that thing; skipping recesses, lunch periods, even games of Heads Up Seven Up–if teach would let me.

When I finished each drawing (tracing paper), I’d carefully cut it out of the book and save them each in my school desk. For some reason, I decided to give my favorite traced drawing, an amazingly-detailed illustration of Venom (villain of Spiderman), to a good friend of mine in my class. I had spent hours on that drawing, erasing and re-drawing certain sections of it to get them exactly right, making sure I had as detailed and exact portrayal as the original artist did.  A few days later, we got in a fight (probably about what a great artist I was), and he crumpled up my the piece of tracing paper with the drawing of Venom on it, right in front of me. And if you know tracing paper like I do, then you know that it’s impossible to get wrinkles out of when it’s been even slightly crumpled.

Through the tears, I remember feeling a righteous anger towards the boy. Whenever I see a news article or story about an assault or see a movie about a bloody murder and hear people say things like, “How could he do something like that?” or “What kind of human being would treat another like that?”

Me. I am that type of human being. In that moment, I would have destroyed that kid, had it not been for Mrs. Brown. I don’t remember my exact thoughts at the moment, but I do remember a very distinct feeling of overwhelming rage and frustration mixing with feelings of depression, loneliness, and complete abandonment and a bit of hopelessness for good measure.

It was a rough time in my life, that’s for sure, but the destruction of something that meant so much to me, that I’d spent so many hours on, and so much passion, pride, hard work, and concentration on, was something my little 9-year old mind wasn’t able to really process. It was, very literally, overwhelming to me at the time.

It probably wasn’t a very good drawing, to be perfectly honest. I mean, I still have some of my drawings from back then, and they’re okay. I wasn’t Leonardo da Vinci or anything, but I was passionate about my drawings, to say the least. And while I knew I could re-draw the stupid tracing page of Venom, it wasn’t about that. It didn’t matter to me how much time I’d spent on it. That was definitely frustrating, but it wasn’t what caused my extreme anger and lividity. And even though the dude who crumpled up that paper was a friend of mine, I don’t think his betrayal and rejection of the gift I gave–which was infuriating, no doubt–was the core reason for my complete breakdown.

It was the destruction of art. My art. That sounds dumb, I know. And I’m not one to get on my high horse about preserving art or whatnot–at least I wasn’t, before this post–but I knew there was something inherently special in my drawing. Even though it was completely traced, a virtual copy of the original Marvel artist’s rendition, it was still unique. There were inumerable shading differences, coloring changes, even errors on my version that made it unmistakably, and eternally: my creation. No one, from now till the end of time–even the other thousands of kids who bought that same book–will ever create that same image that I did on that tracing paper.

It’s that originality, and true creativity that I value. Even at the age of 9, I knew that. In the destuction of something so unique, so cherished, there is death; a death that can never be overcome or revitalized. If I sat down, even now, to try to re-draw that Venom picture, it may be “better”, or closer to the book’s version, but it wouldn’t be the same creative expression. 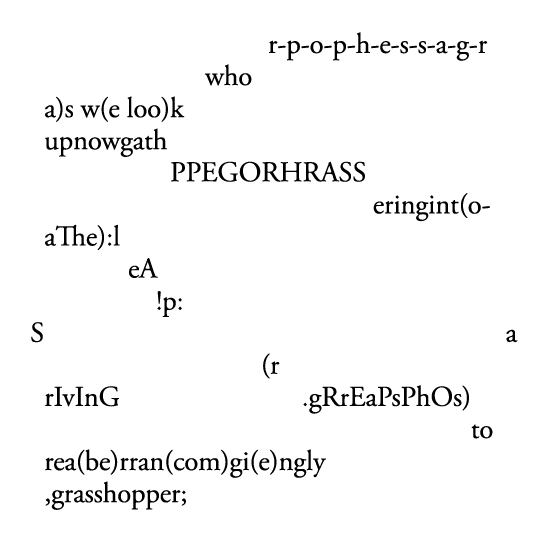 I won’t bore you with too many other stories of my own adventures through art and creativity (okay…I just might), but in my search for finding the perfect art form by which to express myself, I’ve come across hundreds and thousands of inspirations, outlets, and other forms or art that have made me better understand and cherish even more the idea of creativity.

(Probably leaving out some good ones, but my point is: I want to pass down my high value of creativity to my little, hippy children.)

I think it was in reading E. E. Cummings’ Grasshopper some time in middle school, that the first real paradigm shift of art took place in my mind. The idea that you could take a poem and flip it around like a Jackson Pollack painting (and make it even more beautiful and meaningful) was such a novel concept to me, it’s something that’s impacted every piece of art I’ve touched every since. When I read Jonathan Swift’s A Modest Proposal, the doors to the world of comedy, sarcasm and irony flew open and I was never the same again. The idea of satirically arguing for the idea of selling poor children to the rich folk as food, in such a convincing, rational, hilarious fashion was possibly the most significant single piece of art I’ve ever experienced, and still informs my everyday thinking.

When I started recording music, later on in high school, the idea that you could play something, record it, and then manipulate the hell out of it and make a completely different sound, or series of sounds made my brain exploded (hyperbolically). While I’m not exactly Gregg Gillis or Ben Burt, the idea of creating things from previous things by changing the very nature of sound opened up a whole new world to me, not only musically, but through every facet of creation I could get my hands on.

That’s probably what led me to my love of Photoshop. Cropping and chopping photos has been some of the most fun and rewarding things I’ve ever done. That led to creating logos, managing websites, creating fonts, and better understanding the world of graphic design one day at a time. It’s still something I put hours into each week, and fold into every single job I’ve ever had.

The last two, are still the two freshest: Photography and Beer.

While Photoshop drew from my passion for altering and adjusting already-existing photos, it eventually led to my love (and occasional obsession) with photography. Again, I don’t have the best, brightest, most expensive, biggest, sharpest, or megapixel-iest camera or lenses in the world, but I still love the idea (and the actuality) of creating something that’s never been created before. Sure, the City Hall building in Pasadena has been captured in photos before (here, here, and here), but it’s never been captured, tweaked, edited, and printed quite like this before I came along–and probably won’t ever again.

And finally, my true love: beer. It’s something that’s so, almost incomparably different than any other type of art I’ve ever considered before, that I hardly consider it art at times. But it most definitely is. Whatever your definition of art is, I’m quite sure my creation (and often my enjoyment) of beer qualifies. I won’t get too into the science of it right now, but the thing that separates beer from photography, painting, music and writing (to me) is the fact that it is every-changing. Similarly to the fact that glass melts slowly (as glass is technically a liquid), and paintings fade and deteriorate, beer changes as it ages and continues to ferment over time. And while all art can be consumed, beer is literally absorbed by the body, and enjoyed more viscerally than any other type of art form I’ve enjoyed.

So the next time you’re over at the Helms household for a weekend, let’s get out the guitars and jam a little bit while we’re enjoying a few homebrews, before we set them on top of our homemade redwood coffee table, on top of our handmade oak coasters, and we’ll write a few songs. Maybe after that we’ll design a beer that encapsulates the weekend entirely, and we’ll brew that up after we spend a few hours designing the perfect label for it.

All of which will be the first, and last time those things have ever been done. All of them completely original, and wholly creative. That’s who I want to be.