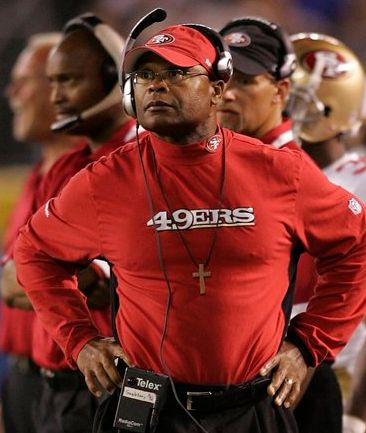 NOTE: I started writing a blog article on the draft results from today (as well as this weekend), and during my research I found a great article on 49ers.com about the offensive lineman the Niners picked up in the first round and how they’ll change our team significantly. So yeah, read that, then read this schedule breakdown (if you haven’t already). Then stay tuned for my post-draft breakdown of our newbies (sometime on Sunday). Enjoy!

As seen in private emails with Tyler Weaver (by Tyler Weaver and I, that is) here’s a little San Francisco 49ers shecdule breakdown for the upcoming 2010 season…

So, we got Ted Ginn, Jr. from the Dolphins for a 5th round pick. At least we got speed…And we got David Carr from…whoever was smart enough to get rid of David Carr. He’s no help at all.

Well, according to this video, (watch this video, it’s much better than this article I’ve written) we have the NFL’s 5th easiest schedule. While I’d love to improve on our 7-9 record from 2008 or even our 8-8 record from 2009, but I don’t think I’ll be able to get us to double digits with a clean conscience. Let’s see what happens…

WEEK #1) September 12 – @Seattle Seahawks: Hmmm…First game of the season, on the road. Let’s see…We’ve split it the last few years, but the Seahawks are on the way down and we’re on the way up. The 49ers have started strong in recent years, and I think they’ll keep it up. Let’s call this a WIN. (Record 1-0)

WEEK #2) September 20 – New Orleans Saints (MNF): Toughest game on our schedule, obviously, and it’s on national television. Although we’ve played pretty dang well with a national spotlight the last few years, I can’t imagine calling a game against the Super Bowl winners a win. And even if you look what we did in the first 50 minutes of the Colts and Vikings games last year…it’s definitely a possible win, but I’ll count it as a LOSS for argument’s sake. (Record 1-1)

WEEK #5) October 10 – Philadelphia Eagles: I gotta call it a LOSS. I know. We can beat ’em, esp without McNabb, but that doesn’t mean we will beat ’em. I mean, I honestly think we can beat anyone, most teams can beat or lose to any team on any given Sunday, it’s just a matter of going out there and doing that, which we won’t…always. (Record 2-3)

WEEK #6) October 17 – Oakland Raiders: We’ve beaten them 3 of the last 4 times we’ve faced them and they suck now more than, well, ever. The Battle of the Bay continues and the Niners get back to .500 with mind-blowing, team-inspiring, re-igniting WIN. (Record 3-3)

WEEK #7) October 24 – @Carolina Panthers: They were an even 8-8 last year, and they did beat the Saints in the last game of the season, but call it gut or favoritism, I gotta go with a WIN on this one. (Record 4-3)

WEEK #8) October 31 – Denver Broncos: The 49ers gave up a true home game to play this game in London will travel far more than any other team this year (over 16,000 miles, with the second team under 12,000), and this reason is a large part of it. While Wembley Stadium won’t be sold out, it will be a good game. The Broncos are constantly underachieving, plus they lost Brandon Marshall…I’ll call this a SPLIT decision… (Record 4-3-1)

WEEK #10) November 14 – St. Louis Rams: I know, the draft hasn’t even happened yet and the Rams’ll probably draft Ndamukong Suh or Gerald McCoy, forever changing the fabric of their franchise, blah, blah, blah. What it won’t do is change the fact that we beat them a combined 63-6 last year in both games. Most obvious WIN on our schedule. (Record 5-3-1)

WEEK #12) November 29 – @Arizona Cardinals (MNF): Our second Monday Night Football game of the season won’t end at all like the first one. Like ESPN.com said after we beat them 24-9 in our last meeting, “Bill Bidwell owns the Arizona Cardinals for 363 days a year, but the 49ers own them the rest of the time.” That’s a W-I-N. (Record 7-3-1)

WEEK #13) December 5 – @Green Bay Packers: No. Not in Lambeau. Never. That 1998 Steve Young to Terrell Owens NFC Wild Card win over the Pack, or “THE CATCH 2”, is the only time we’ve beaten them in the last THIRTEEN attempts. Yeah. Sorry Niner fans. LOSS. (Record 7-4-1)

WEEK #15) December 16 – @San Diego Chargers: A lot like the constantly underachieving Broncos, I gotta go with a SPLIT here too. Mainly just b/c they’re two of the most schizophrenic teams in the league. Especially in sunny San Diego though, we probably can’t take this one… (Record 8-4-2)

So, overall we’ll call it 11-5? or I guess technically anywhere from 10-6 to 12-4. Either way, we need to win those 6 NFC West games to reach the playoffs, if we can’t even do that, then not much else matters. So yeah, 11-5? I’ll take that. Heck I’d even take us losing two NFC West games and going 9-7. I mean, it’s an improvement, but let’s hope it’s the former and go out there and try to steal a game or two!